You may think that Acomb is one of the lesser interesting parts of York, but delve beneath the surface and you may come across some interesting facts. Here are ten things that you may or may not know about York’s largest suburb.

Rear Garden: The Cat Who Knew Too Much, the sequel to The First of Nine: The Case of the Clementhorpe Killer, is set in Acomb. While writing it I came across the above facts and many more.

By setting the novel in Acomb, I could explore what might lie beneath the surface of a seemingly ordinary suburb.

By having a cat as the central character, Theodore can access places denied to humans. He can pass through hedges into other people’s gardens without anybody batting an eye. He can peer through windows, carrying out undercover surveillance without the householder realizing. He can trail a suspect without arousing suspicion. Having a cat as a detective may not be as crazy as it might at first sound…

Rear Garden, like its predecessor The First of Nine, is a cat’s take on murder mystery. It’s cozy crime with claws!

The first chapter of the new Theodore book is below.

Welcome to God’s Own County

She takes a last drag on the cigarette and drops it from her bedroom window, down the gap between the house and the shed, like she has done a thousand times or more, but this time, rather than smouldering out with the rest of the butts, the shed explodes with a bang.
Her dad staggers out. He’s on fire. He stands in the middle of the lawn. He flaps his hands against his clothes, trying to put out the flames. He turns and faces the back of his house. He looks up at her bedroom window. ‘Hell,’ he shouts. ‘Hell fire!’
She is 14 years old. She has unicorns and princesses on her curtains, pink and blue. She has grown out of them but her dad has promised her new curtains, yellow ones. She wonders if she’ll get the yellow curtains now.
From the bedroom next to hers, she hears her sister scream. She is three years older, about to go off to university.
Then she sees her mum run outside, wet tea towels in her hands. ‘Get down on the lawn,’ her mum shouts at her dad.
Her dad lies down on the lawn and her mum pushes the wet tea towels against the flames and smouldering clothing. Her dad has stopped screaming and she knows he is dead. His mouth is open; his gums peeled back to show off his yellow teeth.
There is a corpse, with blackened, blistered skin, clothes burnt onto flesh, lying in the middle of the neatly trimmed lawn.
Her mum shakes out one of the tea towels. It is streaked with soot. She lays it over her dad’s face.
The tea towel has rolling green hills and winding blue streams on it, and bares the slogan: ‘Welcome to God’s Own County’.

Rear Garden: The Cat Who Knew Too Much

Born Out of Character 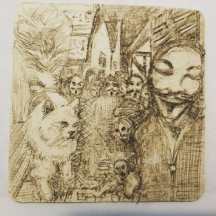 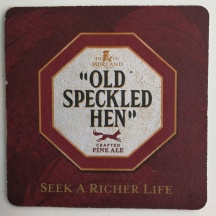 Black biro and cigarette ash, again on the back of a Yorkshire Blonde. 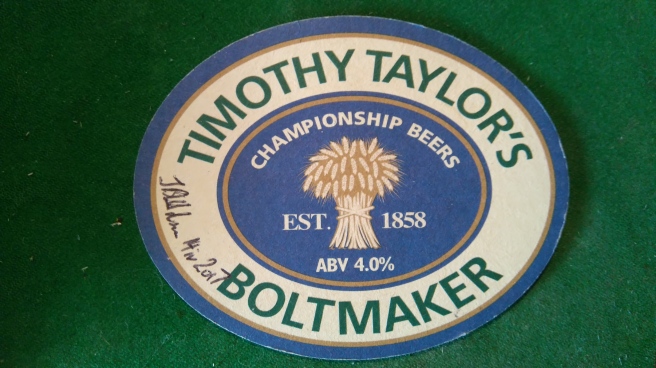 Rear Garden on the back of a Timothy Taylor Boltmaker beermat, executed in black and green biro, felt tip, and blue and green highlighter pen (Easter 2017, York). I think I might have overdone the colour, hence the B&W version.

Black biro on the back of a Hobgoblin beermat, swiped from The Sun Inn, Acomb, York. Probably sometime in 2015.

This was later developed over Easter 2016. 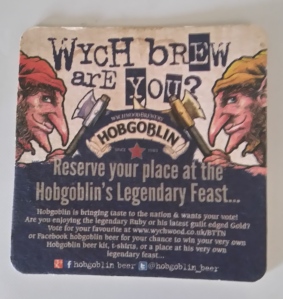 Source: Paperback of The First of Nine now available…

Paperback of The First of Nine now available…